Flair style in Cuba, more than bottles in the air

More than a style, flair is art. Mixology and acrobatics come together in a unique show. Then the cocktails entrap us long before the moment of tasting.

Today we are approaching this more than a century-old way of doing, made known by legendary American bartender Jerry Thomas, but which in recent decades has gained special impetus in bars in Cuba and the world.

The details come from the hand of several of its current representatives in the Caribbean archipelago: Yasmany Portal, Joel Pons, John Gerald, Jesús Ernesto Gálvez and Ipólito Moreno.

Their inspiration to dedicate themselves to flair has been the possibility offered by this modality to serve high-quality cocktails without delaying the service, and the positive effect that each movement has on customers and the skill with which they are able to do it, whose surprise effect confirms that “It’s definitely something unique, no matter how many times you see it,” says Ipólito Moreno, bartender at the Donde Juan Restaurant-Bar, one of the current advocates of this modality.

His colleague Jesús Ernesto Gálvez, from the Saltzucar bar, had the same motivation: “I decided to learn this modality to provide customers with a show: in addition to a good cocktail, they would enjoy a small show first and then a good mix.”

For everyone, the road has been long and laborious. Observing and learning from the most experienced, countless hours of practice without neglecting the study of mixology have paid off. The flair bartender is a figure that is gaining recognition and prominence.

However, as Joel Pons affirms, “you can’t leave aside the fact that customers came to the bar for a cocktail, and your main objective is that your mix meets their needs.

“Executing both well, you will have a happy customer, but most likely he will become an ambassador for your bar, when he meets family or friends he will tell them that he had a great time, the atmosphere was great, good cocktails and the bartender did amazing tricks, and he will be a repeat customer.”

There are several, each with unique characteristics that give the routine an exclusivity, says Yasmani.

In general, the interviewees mentioned:

-Snatch: catch the bottle with the shaker.
-Shadow pass: pass the bottle in one hand behind the head.
-Rainbow: movements that make the bottles pass from one hand to the other drawing a rainbow.
-Taps: quick movements used to change the direction of the bottle.
-Stalls: throw the bottle or the cocktail shaker so that it turns in the air and falls standing on the forearm, hand, elbow or forearm on the other side.
-Rolls: roll the shaker/bottle along the hands or different parts of the body.
-Bumps: hitting objects with the elbow or forearm in reverse.

Still, creativity is essential, and each one makes their contributions to established movements, and thus defines their own style.

“Each flair bartender must enrich his choreographies with original movements created by them, that is what makes flair evolve, become richer and year after year new trends can be seen,” says Joel Pons. 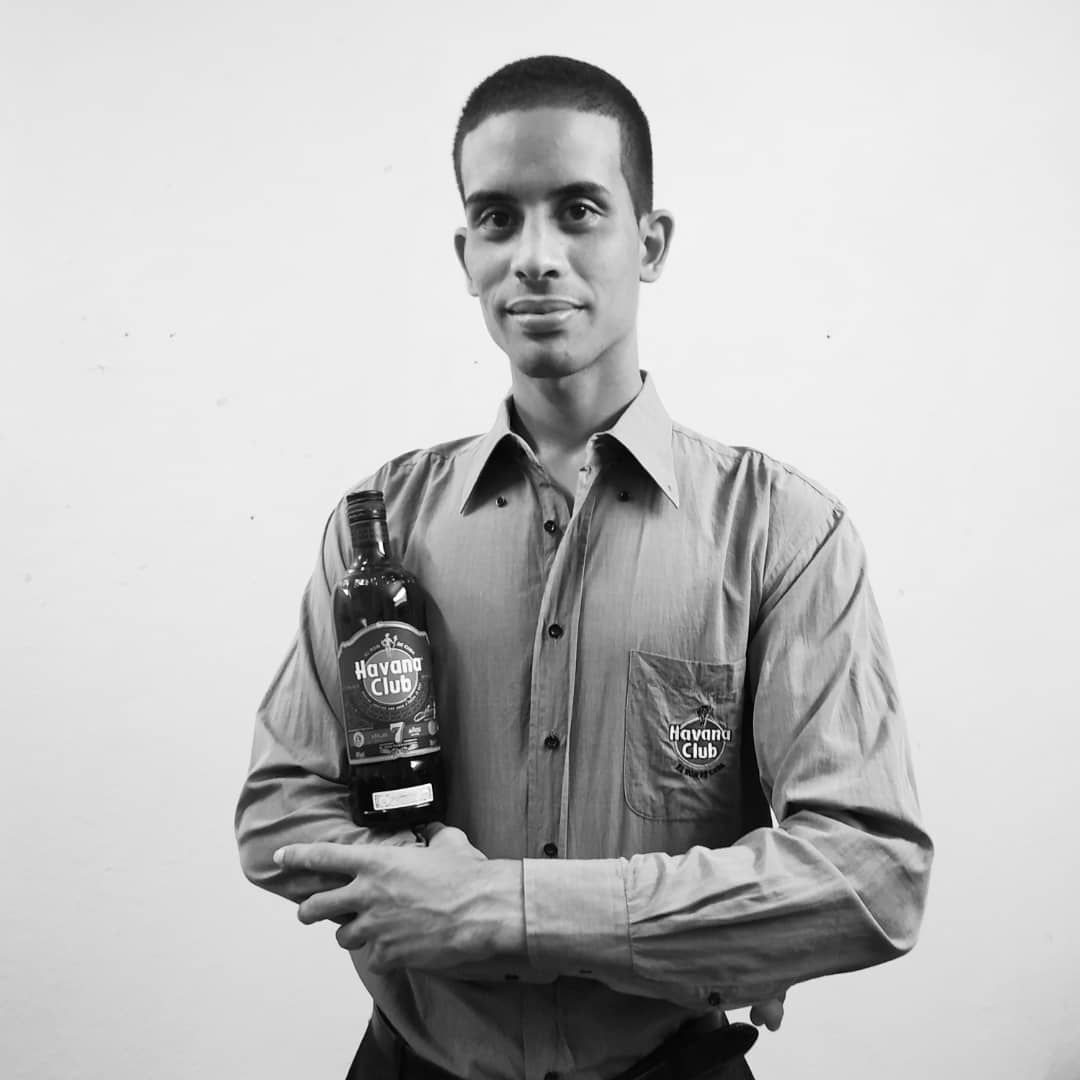 He adds that within the Working flair, there is the Craft flair modality, which departs a little from the classic movements, and focuses more on “working in style” with the bar utensils, making rotations between the fingers with spoons, using the shovel, strainer, meter, napkins, straws and almost any object that we have around us to give it a different touch.

Among his favorite movements―especially because it’s his―is the Helicopter on the Head: throwing the bottle from behind his back and that it falls on the head, turning, and then catching it with his hand.

Ipólito Moreno also has some of his own movements such as the signature catch, in which he catches a bottle with one leg.

The multiobjects movements are the most liked by John Gerald, bartender of the Creperie Oasis Nerva, more suitable for exhibitions and competitions, although, he confesses, he prefers freestyle, playing with music and letting his creativity flow. 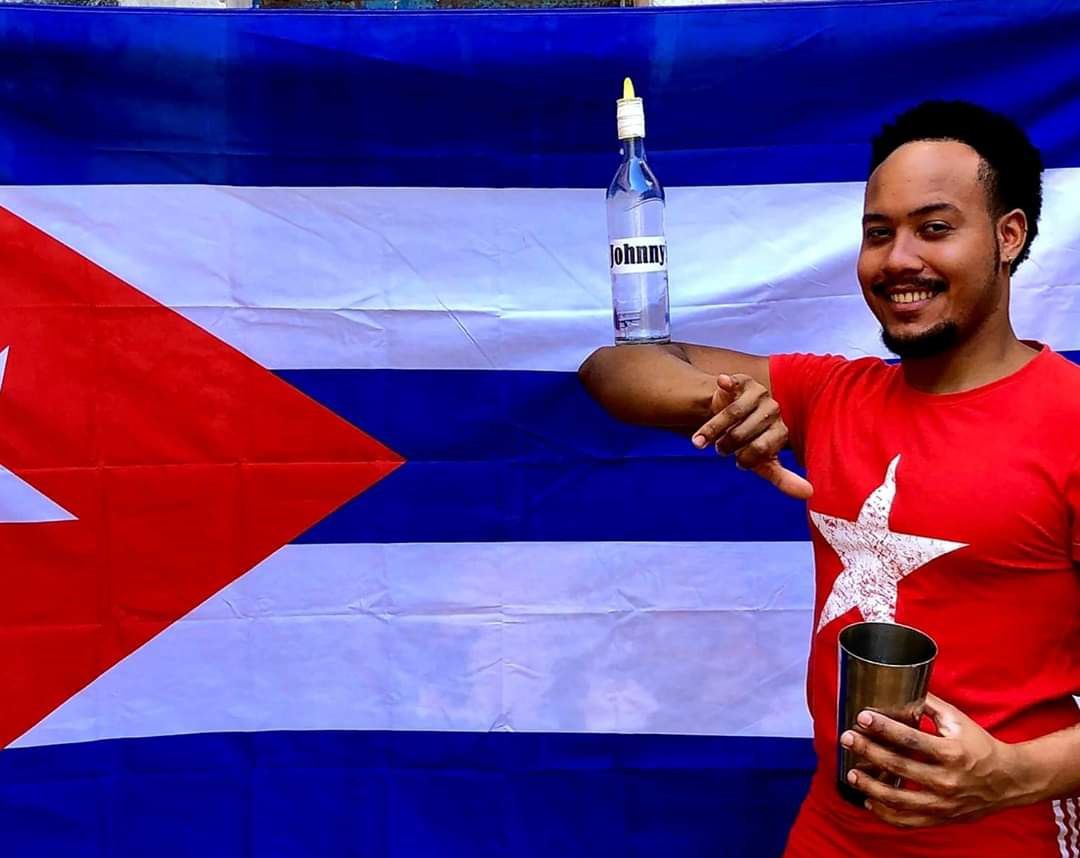 The main stars in each show are the Havana Club rum bottles both in Cuba and in other countries. Our flair bartenders recognize that they are the best they have used.

The reasons? Their strength, they are neither very light nor very heavy, the union between the body and the neck doesn’t have such a pronounced curve, which greatly facilitates the grip.

Beyond providing an ideal work material, the brand has stood out in supporting the flair movement in Cuba, part of its permanent boost to the Cuban Association of Bartenders. It is worth underlining its role as the official sponsor of the Fabio Delgado in Memorian contest, the main contest of the guild in Cuba, which includes the flair in the competition. The first place classifies for the Pan American Cocktail Championship.

In Cuba, flair working or exhibition?

The interviewees agree that, with different functions, the first one in daily work and the second one more elaborated, for competitions, the two modalities play a fundamental role for the development of flair.

“In competition both are compulsory, at work if you have the skill and ability you do whatever you want, depending on the number of customers you have to serve at the moment and where the bottles are at the moment, it’s rather good to improvise, any movement, easy as it may seem, can fail you, but if you are sure of yourself, it’s worth taking the risk,” says Yasmani Portal.

For Joel Pons, although the development has not been even, these modalities are progressing at a good pace. “The Working Flair (service behind the bar) is already being seen in bars, especially in Havana and some hotels in Varadero; and the exhibition one (for shows and competitions) is still in a slightly more distant position than the other, although it has an accelerated growth, and this has been influenced by the facilities of internet access in recent years, since bibliographies, tutorials, competitive videos are very useful tools to train, and they are attracting the attention of those who are already working as bartenders and those who are starting their career.”

With the necessary instruments, and the adaptation of the techniques to the space, more than one setting can be ideal for customers to appreciate and enjoy it.

Any type of bar, be it at a disco, a restaurant, or a hotel, can be good to show this art that pleases both the eyes and the palate.

A success to be highlighted in the Cuban flair movement is that, in August 2019, the first round of leveling exams of the World Flair Association, an training program for bartenders, was organized in Havana with the Flair Mexico School to get the different levels of colors in the flair, from yellow to blue. In each of them bartenders are tested in Free Pour, Working Flair and Speed ​​Round.

As a result, seven nationals successfully passed the Yellow level, and perfected their techniques with master classes and other experiences.

However, the interviewees affirm that they lack places to practice or sites specialized in the modality, although in recent times bars have shown greater interest in offering this exceptional show from their bars.

But nothing stops flair bartenders. Not even the social isolation of the last months. During that time, they have trained at home and participated in online competitions such as a tournament organized in Mexico with 64 competitors from Latin America. They have also taken part in several challenges throughout the world.

The flair in Cuba is making its way and increasingly gaining professionalism and followers. Each pirouette bears the signature of a long time of effort, and shows that we are talking about much more than throwing bottles into the air. The recognition of customers and experts confirms this.